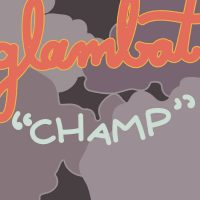 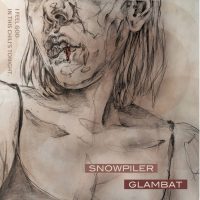 I Feel God In This Chili's Tonight 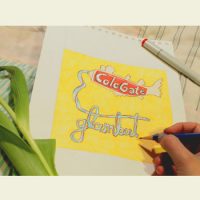 Emily Rose writes her songs very privately. She keeps a digital sound scrapbook in the voice memo app on her phone — since September 2015 there have been over 300 entries. Some of these scraps are fully-formed songs, some song fragments, others are sounds from life: Background noise from a local bar, rain falling on the living room window, potatoes sizzling in a pan on the stove.

Glambat is a practice of transmutation. Through lyrical riddles and rambling hooks, the listener enters the maze of human perspective. Isolation is solitude. Pain is a learning experience. Embarrassment is vulnerability and vulnerability is strength. The slacker is the magician, the victim is the survivor.

The outside world engages in the magical thinking of luck and blame. Glambat accepts the chaotic, random nature of the universe and makes the decision to find magical moments in the details of the concrete world. Regardless of initial intention, meaning is a creation of the fourth-wall observer.

The music itself aims its gaze at familiarity. Emily Rose digs in her hooks as though beginning a pop song, then quickly unfurls into an experiment. She weaves the song with the stuff that surrounds her, organizing fragments like a frenzied hoarder, and brings it all back around in a way that makes inexplicable sense.

Some of her songs are more structurally direct, but Glambat always makes an effort not to repeat herself. Every moment happens once, similar moments can be bound together to form a pattern but they are never identical. Music-theory easter eggs are peppered in for those paying close attention, key and time signature changes feel so natural they often go unnoticed.

Soprano vocals swooping through steady rhythm guitar are the key elements of every Glambat song. Basslines are subtly complex, carefully planned and executed by Mike Alderman. Emily Rose often spends time singing with Katie, writing descant harmonies for her sister to sing onstage. Kyle MacKinnel makes use of a unique chain of pedals, coming in on lead guitar at exactly the right moments. The drums often begin modestly, building to dramatic crashes under the skillful guidance of Sam Carlson.

Glambat is currently in the process of recording her first studio album with the help of her bandmates. MacKinnel and Emily Rose recorded the demo Cole Gate in MacKinnel’s home studio in March 2018, released by Funnybone Records. The single recently had its live debut when Glambat opened for Palehound and Violent Mae. The current live lineup includes her siblings Katie and Mike Alderman, her partner MacKinnel, and longtime friend Sam Carlson. Since Glambat’s conception in 2015, the flexible lineup has seen many familiar Connecticut musicians come and go; it’s always a small-town supergroup.

A Spirited Q&A with New Haven, CT’s Glambat: An Interview with Sound Session